While the Investment Advisers Act of 1940 (the Advisers Act) does not exclude Exempt Reporting Advisers (ERAs) from the U.S. Securities and Exchange Commission (SEC) examination process, the SEC has historically affirmed that it does not “anticipate that [it’s] staff will conduct compliance examination of these advisers on regular basis,” and, instead, would conduct exams based only on indications or suspicions of wrongdoing (so-called “for cause” examinations),1 which could lead (and has led) to enforcement action in appropriate circumstances. While the SEC may change course in the future and commence subjecting ERAs to routine exams (as its staff has hinted at least on one occasion in the past), “for cause” exams continue to remain the norm in the ERA space for the time being.

ERAs (unlike Registered Investment Advisers (RIAs)) are subject to only a handful of provisions under the Advisers Act. The chart below illustrates this concept. 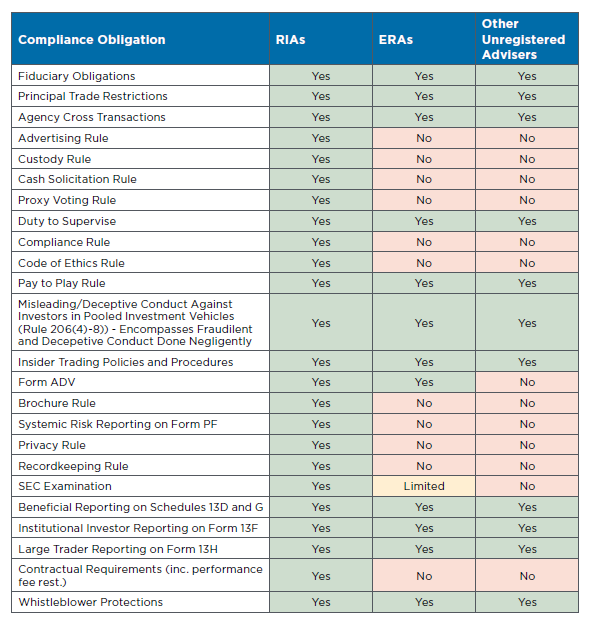 While at first glance this may suggest that ERAs’ fiduciary duty and other GRC obligations may be very light, this is anything but true. As noted in greater detail below, the overwhelming majority of the SEC’s allegations in enforcement actions brought against illiquid fund managers (RIAs and ERAs) over the past few years have focused on allegations of breaches of long-established fiduciary duty concepts applicable to all investment advisers in their dealings with their respective investors (as further codified in the broad anti-fraud provisions set forth in Section 206 of the Advisers Act and Rule 206(4)-82 thereunder). As a result, virtually all of the thematic lessons from SEC enforcement actions brought over the years against RIAs employing illiquid investment strategies are broadly relevant to ERAs in the illiquid fund manager space.

Lessons From an SEC Enforcement Action

The SEC brought an enforcement action against a state-level venture capital ERA with approximately $13.5 million in investor capital commitments for failure to adequately disclose and manage various conflicts-of-interest (including the related failure to implement the controls set forth in the governing documents of a venture capital fund managed by the ERA that are designed to mitigate these very conflicts). Such a tacking of allegations for failure to operationally comply with conflicts resolution provisions in fund governing documents (and/or internal policies and procedures) onto allegations of anti-fraud rule violations arising out of a mishandling of these very same conflicts, has become a staple feature of SEC enforcement actions in the private markets space.

Additionally, the very fact that the SEC was willing to expend resources to take enforcement action against a state-level ERA should signal to all ERAs how serious the SEC is about vigorously taking punitive action against unregistered private markets investment advisers for activities (or lack thereof) that could have a materially detrimental impact on investors’ interests.

The allegations and takeaways from this enforcement action, which should be of wide interest to private markets managers (ERAs and RIAs), are:

Additionally, to the extent an affiliated service provider arrangement was not contemplated prior to the launch of a closed-end fund, based on ACA’s SEC examination experience, seeking the informed consent of the fund’s limited partner advisory committee, and meaningfully disclosing key aspects of such an arrangement (including, but not limited to, proposed fees) to all fund investors prior to implementation, will be especially important.

Further, prior to retaining an affiliated service provider and periodically thereafter, managers should conduct surveys in the relevant markets to determine what comparable quality independent third-party vendors charge for similar services and factor the results of such surveys in setting and periodically adjusting the compensation to be received by their affiliated service providers. Such survey results should, at a minimum, be disclosed to the applicable fund’s LP advisory committee to ensure their consent to/review of affiliated service provider usage is meaningful and informed. Evidence of undertaking such surveys is frequently requested in SEC exams to verify that affiliated service arrangements are being undertaken on an arms-length basis. Additionally, even where firms appear to have, as a matter of practice, undertaken all the right steps to effectively manage conflicts relating to the use of an affiliated service provider, in numerous exams, the SEC has pushed such managers to formally adopt policies and procedures to ensure consistency in approach over the duration of the conflict as well as to facilitate testing adherence to such policies and procedures on a retroactive basis.

Finally, to the extent a manager’s affiliated service provider seeks to receive higher than market rates under the argument the affiliate is seeking to provide white glove services and/or services that are not fully available in the relevant markets (such that a pure apples to apples comparison is not possible), the justification for such premium pricing should be adequately documented and disclosed.

As fiduciaries that may be subject to SEC inspection (and that are being increasingly subject to SEC enforcement action), ERAs should consider adopting compliance policies and procedures relevant to their operations to mitigate regulatory risks. Similar to compliance programs for comparable SEC-registered advisers, these policies and procedures should be designed to prevent violations from occurring, detect and document violations that have occurred, and promptly address any violations that have occurred.

Whether operating as an ERA or an RIA, ACA has a range of services that can help a venture capital firm develop and maintain an effective compliance program.

If you have any questions about the SEC focus areas, or would like to speak with someone about developing and implementing an effective compliance program, please reach out to your ACA consultant or contact us here.

This is just one of many insightful articles included in our Private Markets Quarterly Update Q3 2022. Download the full newsletter to learn about:

How Will the Economic Downturn Impact Compliance Teams?

We discuss the latest Risk Alert from the SEC’s Division of Examinations, the DOL’s change of heart on ESG for plan investments, and the SEC’s rule proposals to change the equity markets.

The SEC’s rule will establish new requirements for firms’ cybersecurity programs while strengthening investors’ confidence in the security of their investments.

Contact our team to learn more about how we can help your firm protect and grow your business.